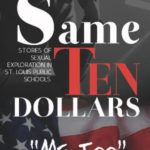 The school environment mirrored all the others where I’d witnessed child abuse exploitation and child on child sexual abuse.  Students attempted to come and go as they pleased. They would frequently skipped in the hallways, counselor office, other classrooms or wherever they could hide out. You would often see adults and students talking as if they were buddies. Id go to class and after class, Id see the same student standing there talking with the same adult who they were with an hour earlier. But in addition, at this particular school the adult and student ratio was nearly 1 to 1 because of all the adult programs housed in the building. I would often witness the grown men making passes at underaged students. Shocking how they would do it right in the open, as if it was normal or worse as if it was legal. As I pondered why were they so opened with me, I knew exactly why. I was a ghetto teacher. I had braids to the back, dressed like I was from the hood and used ebonics and slang freely. I believe many of these men didn’t realize that I was a real teacher and was educated in an environment that caused me to process the things they did as being criminal and appalling.

One day a young woman, Nikki who was in her mid 20s just walked in my classroom and started talking with students. I instantly asked her to leave as I run a very tight, organized class. I was summoned into the office. I got see off the flip that she had some type of hold over the lady who owned the school. I was waarned in a subtle way that this 24 year old who was part of their GED/construction program had a relationship with the owner and therefore had access to the entire building, including classrooms at her leisure. I began to watch this girl and noticed that she led a ring of about 15-20 girls. They all followed her around and called her mama. This was significant considering the school only had about 40 females and 30 boys. At one point, I saw her march them out the door to have a fight on the parking lot of the school. It was crazy because I knew I could not challenge anything she did. Mrs. Fobi believed every word that came out her mouth.

It wasn’t long before God exposed to me exactly who Nikki was to me. I had been sharing with a young girl who was 19 and worked in the building about some things I had fought for over in St. Louis. Naturally she shared her story with me and it happened to include Nikki. See East St. Louis was really small and this girl had dated Nikkis 35 year old uncle when she was only 17. She said she had spend the night over Nikki house with some other girls and they had been drinking. She said she woke up and the girls were attempting to put sex toys in her. I couldn’t comprehend it then and I still can’t comprehend it.

If I was going to survive in that building, I had to make Nikki my ally. I thought of a master plan. A week earlier, I had formed an abstinence program which Mrs. Fobi said would never work because she contended that these kind of girls would never sustained from sex. I’ll never forget her words. She laughed and said, “really Ms. Washington? These girls will never stop having sex.” I’d noticed that Nikki saw the group as a competition with her gang. I insisted and named it “Beautiful Young Ladies”. I made a move to secure more girls and put a stop to the competition that could lead to my early dismay and/or dismissal by pulling these girls biggest enemy close to me. I’d asked her to help me with the program. The gleam in her eyes was one that was driven by a thirst for power. I couldn’t believe she went for it. But her desire to have power overshadowed her question on why I would choose her. She only saw a way to legitimize her gang. Once she was closer to me, I would learn that she was dating one of my 18 year old boy students. And it was made crystal clear to me that they were a predatory team and the young girls at the school were their prey. But what perplexed me was when it became evident that they sought to sexually exploit me also.

Ronald was a good looking young man who came from a police family. He let me know then he told me that he’d be able to rape whoever he wanted when he became a police officer He would say things like this in a jokingly manner but as much as I needed to discipline him about his sexual harassment of female students, I had no doubt that that was his goal. Plus, during the time, East St. Louis police was always in the news for rape and sodomizing citizens. One day, I was ear hustling and overheard them planning on setting up one of the girl students. She was suppose to invite this girl over her house and drug her, then he could come and take advantage of her. As I pretend to be focused on lesson planning or sometime of reading, I got up and walk in the hallway. As I walked passed them, Ronald refers to me and says, “put her on one”. Ronald only saw me as a teacher but she had been around me outside the classroom and knew that I had street smarts. She hushed him real quick because she knew it was a possibility that I knew what he was saying. Of Course I pretend not to catch on and continued to walk pass them. I would witness many of these incidents and have many conversations about girls being taken advantage of in this and outside of this school. Everyone knew these things were going on. It was just part of the culture. But eventually I was told a story that I was mandated to report.